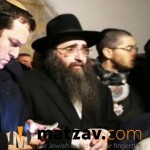 Rav Pinto and a large group of followers attended the ceremony, which was conducted under the tightest security measures.

Brigadier General Lior Carmeli was honored with lighting the menorah.

Rav  Pinto addressed the event and said that we are celebrating the eighth day of Chanukah. “The Jewish nation has the strength to go out – from darkness to great light, in a short time. The Syrian Greeks wanted the Jews to lose their strength, and they imposed decrees on the Jews: they forbade keeping Shabbos, forbade Bris Milah and ibur hachodesh. The common denominator of all three mitzvos is the power of change.”

Rav Pinto  concluded his address expressing the hope that “our prayers to Hashem to have compassion of His people in the merit of this day of Chanukah and the merit of Yosef HaTzadik, and bestow abundance on His people, and we should see the fulfillment of the blessings that I pleaded for, speedily.”

Shomron Chairman Yossi Dagan said that he is “at Kever Yosef with a large number of Jews, locals and Jews from abroad, who gather to light the last candle with Brigadier General Lior Carmeli. Our task is to add light; light dispels darkness. Hopefully, next year, when we come to light Chanukah candles, we will be under Jewish sovereignty, as befitting a holy site as Kever Yosef.”