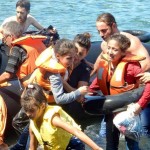 More than 20 U.S. states’ governors have announced they will refuse to take in Syrian refugees following Friday evening’s deadly terrorist attacks in Paris. Alabama Gov. Robert Bentley said Sunday he planned to refuse the relocation. “I will not place Alabamians at even the slightest possible risk of an attack on our people,” the governor said in a statement.

Earlier Sunday, Michigan Gov. Rick Snyder said he would suspend the acceptance of new refugees until the Department of Homeland Security “completes a full review of security clearances and procedures.”