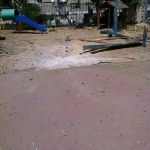 Two Israeli men died of wounds they sustained from a mortar attack on the Eshkol Regional Council near the Gaza border.

According to Magen David Adom (MDA) emergency medical services, four people were injured in the mortar attack; the second casualty succumbed to his wounds at Soroka Medical Center in Beersheba on Tuesday night. Earlier on Tuesday, a rocket slammed into a residential neighborhood in Ashkelon, where 40 people were treated for light wounds and shock, MDA said.

Another rocket salvo launched Tuesday afternoon caused shrapnel to fall in the courtyard of a kindergarten in Ashdod.