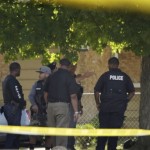 Two children and an adult female were still being held hostage Tuesday evening in suburban Harvey during an ongoing standoff involving two individuals suspected of wounding two police officers in a shooting.

Police initially believed that five children were being held hostage, but after speaking with an 11-year-old child that was released, they learned a sixth child was also taken. The adult female is a nurse, according to police.

Harvey town spokesman Sean Howard said a 911 call was placed at about 12:48 p.m. for a burglary in progress at the home. The first-responding officer saw the burglary under way and responded, Howard said. Gunfire was exchanged and the officer was shot in the arm.

Officer Darnell Keel, an 18-year veteran of the force, was released from the hospital Tuesday evening and was expected to undergo surgery Wednesday morning. The second officer suffered a graze wound and was treated on the scene.

“He’s a man of faith and that’s where his thoughts are right now,” Howard said. “He’s just thanking God that it’s the arm, and not something more serious.”

The suspects took the hostages into the home as police began to arrive. Police officers from 22 law enforcement agencies responded to the barricade situation.

“We thank God that our officer was not injured more seriously than he was, and our major concern right now are the individuals inside the home, that’s what we’re focusing on right now, their safety,” Harvey Police Chief Denard Eaves said.

“We’re just asking for a safe recovery of all the family and that no one will be hurt in this incident,” an unidentified family member of the hostages told reporters.

Hostage negotiators are in place, talking to the suspects through an open window.