Reuven Fenton reports in the New York Post:
It’s a fill-up with a schmear. A gas station in one of Brooklyn’s Orthodox Jewish communities is offering up more than just candy and soda — it’s also peddling hearty stews, bagels with lox, challah and homemade gefilte fish for commuters hankering for an old-country nosh. “People fill up on gas and fill up on food at the same time,” said Sam Kay, 50, as he munched on goodies at Rio gas station in Borough Park. “It’s good, Jewish and tasty.”Rio is on 14th Avenue and 38th Street in Borough Park, a neighborhood heavily populated by Hasidic Jews. In 2005, a new owner bought the station and transformed one garage bay into the Heimeshe Coffee Shop.

Its proximity to the Brooklyn Queens Expressway makes it a convenient pit stop.

“We get a lot of the same people every day,” said manager Asher Haliva, adding that the cholent — a stew of potatoes and beans — is particularly popular. 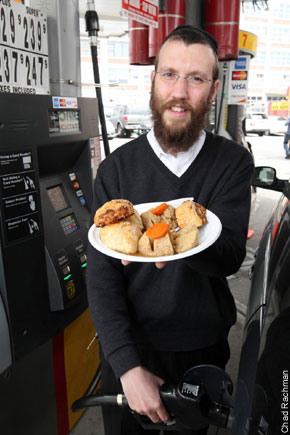 The gefilte fish is made on site from ground whitefish mixed with eggs and seasoning, which is boiled and served with sliced carrots.

The station also sells shakshuka, a Middle Eastern medley of fried eggs and tomato sauce, and an array of pastries from Ostrovitsky’s, a well-known kosher bakery in Midwood.

Customer Esti Babiov, 34, said the gas station is ideal for her community.

“Where else can you fill up your car and get kosher heimish [home-like] food while you’re waiting?” she said.

Business usually picks up Thursdays and Fridays, when customers grab delicacies for Saturday, when the gas station is closed for the Sabbath.

“You’ll have a guy who comes Thursday night. He can pop in and get himself a good cholent, a cold drink, and be on his way,” said Yossi Rubinfeld, 30, who frequently pulls into Rio in the morning before going to work — but not to buy fish.

“In the morning, I don’t need heimish food. I need an apple danish and a coffee,” he said.

“The gefilte fish is for the afternoon.”