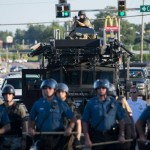 At least 184 local and state police departments have either lost military-issued weapons or failed to comply with government guidelines regarding them. The Pentagon has suspended these police units from its “1033 program” for actions that including losing M14 and M16 assault rifles, as well as .45-caliber pistols and shotguns.

There are even two cases of missing HUMVEEs. The program began in 1990 and over the past 24 years, $4.3 billion in weapons and equipment have been transferred to over 8,000 police units across the country.

“We don’t know where these weapons are going, whether they are really lost, or whether there is corruption involved,” said Tim Lynch, the director of the CATO Institute’s Project on Criminal Justice. There is also concern that the weapons have ended up on the black market. “That uncertainty is very unsettling,” said Lynch. Read more at Fusion.