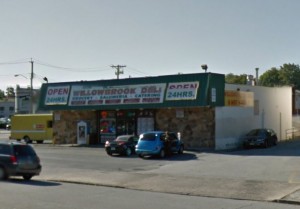 Putting the Powerball jackpot aside, a New Yorker scored some big bucks yesterday. Some lucky person – with some even spreading rumors about the winner being a Jewish man – bought a $165 million Mega Millions ticket at a deli in Staten Island, Gothamist reports.

The ticket was sold at Willowbrook Deli in Castleton Corners with the numbers 11, 39, 51, 57 and 75—those just happened to be the winning Quick Pick ticket for Friday’s Mega Millions jackpot.

“We were shocked,” deli manager Sarbjit Sing told SI Live. “We didn’t see the winner yet, but we’ve been asking our regular customers to check their tickets.”

The winner hasn’t been announced yet.

The Powerball jackpot for later this week is over a billion dollars.