It is not every day that a 16-year-old finishes Shas. One week ago, however, that is exactly what happened, as Meir Yehudah Hoffman, a 16-year-old bochur whose family is part of the Toldos Aharon chassidus, completed Shas in Meron in the presence of the Todos Aharon Rebbe.

On Rosh Chodesh Elul, shortly after 8 a.m., Meir Yehudah arrived at the Ohr Zoruah Kollel locate adjacent to the kever of Rav Shimon bar Yochai, where the Rebbe watched as the young bochur made the siyum on Talmid Bavli.

Rosh Chodesh Elul wasn’t just a day for Meir Yehudah for a number of reasons. It was actually his birthday too, and he decided that the culmination of his efforts would be celebrated on this special date. As soon as he heard that the Toldos Aharon Rebbe had 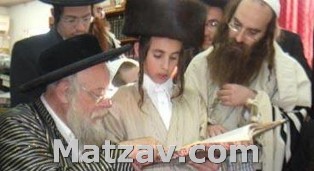 traveled up north to Meron, the young bochur decided that there would be the perfect place for the siyum to be made. Completing Maseches Niddah, he recited the words of the Hadran slowly and with joy, as all those in attendance watched in amazement.

Following the siyum, the Rebbe distributed lechaims to those assembled, full of simcha and emotion that a young bochur of kehillah had achieved such an important and difficult accomplishment.

Meir Yehudah’s two younger brothers also made siyumim on mesechtos at the gathering. No doubt they are looking at their older brother with awe, hoping to someday emulate his monumental achievement of completing Talmud Bavli.