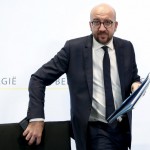 Belgian federal prosecutor Eric Van Der Sypt said no weapons or explosives were found during the raids. Two shots were fired during an operation in Molenbeek, he added.

Prime Minister Charles Michel also announced on Sunday that Brussels will remain at the highest level of terror alert on Monday, which means that the metro, schools and universities will remain closed. Read more at BBC News.