Hundreds gathered today at the intersection of Rechov Shivtei Yisroel and Rechov Hanevi’im in Yerushalayim to protest against the opening of the Karta parking lot on Shabbos. The lot, which is located near Shaar Yaffo, has 800 spaces. Fifteen protestors were detained by police. Some 150 people made it to the parking lot area and tried

In June, following the protests sparked by the municipality’s decision to keep the Safra parking lot open on Shabbos, and a court order to that effect, Mayor Nir Barkat announced that Safra will remain closed and the city’s Karta lot will be opened in its stead. 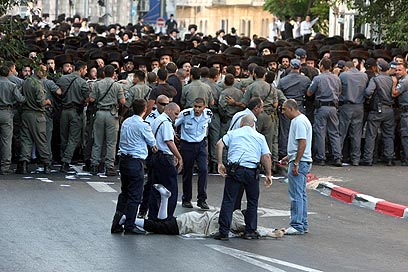 Since then, the frum community has protested every Shabbos.