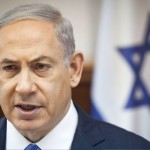 Israeli Prime Minister Bibi Netanyahu has strongly condemned a video showing a group of far-right extremists celebrating the murder of a Palestinian family in the village of Duma last summer. The video footage, aired on Wednesday by Israel’s Channel 10, was taken at a wedding.

“The shocking pictures that were broadcast this evening show the true face of a group that constitutes a danger to Israeli society and to the security of Israel. We are not prepared to accept people who deny the laws of the state and do not view themselves as subject to them,” Netanyahu said.

“The pictures underscore how important a strong [Shin Bet] is to the security of us all.”

Police have opened a criminal investigation into incitement to violence based on what is shown in the video.

Several people in the video were dancing while passing around assault rifles while one person held a knife and a molotov cocktail. Another individual was stabbing a photograph of Ali Dawabshe, the 18-month old toddler who was burned alive in the arson attack in Duma.

Amidst the controversy, that Shin Bet interrogators allegedly tortured suspects connected to the arson attack, the Shin Bet on Thursday said those claims are made in an effort to distract from “severe attacks motivated by an extreme anti-Zionist ideology,” from a Jewish extremist group who seeks to overthrow the Israeli government through violence and crown a king.

“This organization continued to carry out attacks after the arson attack in Duma and they saw that attack as something to be emulated,” the Shin Bet said in a statement.