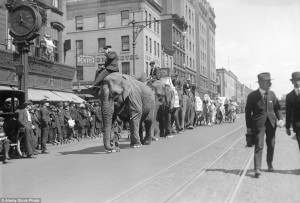 When the grime of city life proved too stifling for New York residents in the late 19th century, they would arrive in droves at the popular amusement area of Coney Island – just a short distance from Manhattan.

Nicknamed America’s Playground, the entertainment destination offered a plethora of rides, theatre performances and was even said to have sideshows involving sword swallowers and snake charmers.

Beaches were packed in high summer with swarms of city dwellers, including female bathers wading into the sea in long dresses to escape the heat.

Hotels began to appear in the area and with regular rail and ferry services, the island became a popular destination for middle-class tourists as well as the wealthy.

In the later years of the 19th century, the rough and tumble party spot was even dubbed ‘Sodom by the Sea’, although more family-friendly amusements began to pop up in the 1900s.

One of the most famous features was Luna Park that opened in 1903 and was a fantasy world with live camels and elephants.

These incredible black and white retrospective photographs show Coney Island in its heyday from 1896 to 1905.