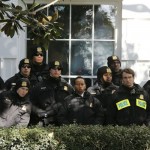 A man masquerading as a member of Congress walked into a secure backstage area without being properly screened and spoke with President Obama at an awards dinner last fall. Five days later, a woman walked backstage unchecked at a gala dinner where Obama was a featured guest. Months after that, two people strolled unnoticed past a Secret Service checkpoint into the first layer of the White House grounds.

The incidents were among a half-dozen previously undisclosed security breaches since 2013 that were detailed in an extensive, bipartisan congressional investigation of the inner workings of the Secret Service.

In a critical report to be released publicly Thursday, House investigators describe the once-elite force as an “agency in crisis” that has failed to fix many of the deeply ingrained problems exposed last year amid a string of humiliating security lapses, according to a copy of the report obtained by The Washington Post.

The report offers detailed assessments of the failings of the Secret Service during several well-publicized security incidents, including the agency’s halting response to a 2011 shooting at the White House and an incident last year in which an armed man with an arrest record was able to board an elevator with Obama.

More broadly, the report assessed the Secret Service as an agency that remains deeply troubled, despite recent attempts at reform. It concludes that the service has a “staffing crisis,” with fewer personnel today than in 2014, when an administration panel recommended adding 280 new staff members and Director Joseph P. Clancy took over vowing to enact the reforms.

“The agency’s recent public failures are not a series of isolated events, but the product of an insular culture that has historically been resistant to change,” states the report, compiled by the Republican and Democratic staffs of the House Committee on Oversight and Government Reform.

The staffing decline, which includes the uniformed-officer division that guards the White House, is “perhaps the greatest threat” to the Secret Service, the report says. Among other factors, the report points to past budget cuts and “systemic mismanagement” by the agency.

Although Clancy assured lawmakers earlier this year that there were “no greater priorities” for him than hiring the right number of staff, the agency’s roster has dropped from 6,367 full-time employees at the end of September 2014 to 6,315 one year later — its lowest point in a decade.

Morale is “critically low,” contributing to a drop in personnel through attrition. The report also blames the decline on “systemic mismanagement” and an inefficient hiring process that hampers recruitment of high-caliber staff.

“The high attrition rate means that the personnel who remain are significantly overworked, and morale is at an all-time low,” the report says. The report also warns that the agency’s new hiring system “overburdens USSS with low quality applicants.”

The report also warns that Obama and 2016 presidential candidates face heightened danger if the administration does not swiftly fix the agency’s problems.

Rep. Jason Chaffetz (R-Utah), chairman of the Oversight Committee, said the report should spur further action by the Obama administration.

“The situation is getting worse not better,” he said. “The president is in jeopardy, and he better personally get involved in fixing this.”

Rep. Elijah E. Cummings (Md.), the panel’s ranking Democrat, said that he supported the report’s findings but that it “may not be exactly how I would have written it.”

Cummings said he, too, is deeply concerned about the safety of the president and the first family and worries there is a cultural problem at the agency.

Cummings said Congress shares some blame for making some of the biggest funding cuts in agency history in 2011.

A Secret Service spokesman said the agency received the report late Wednesday and would not comment until officials had time to review the full findings.

“The Secret Service recognizes that the House Committee on Oversight and Government Reform is legislatively mandated to exact oversight on the Secret Service,” said spokesman David Iacovetti. “We are reviewing the report at this time and will carefully assess any recommendations made by the committee.”

The investigative report is highly critical of the Secret Service’s management, saying its nature is to cover up problems and punish those who flag concerns. While Clancy has promised to encourage staff to come forward with their complaints, the report says he and his team have largely failed to set a new tone.

The agency “cannot repair itself without first restoring the trust of its employees and increasing personnel dramatically,” the report states. “Whether from missteps at the executive level or at the field office supervisor level, it is clear many of the rank-and-file have lost confidence in USSS’s current leadership.”

The committee’s probe uncovered a number of previously unreported breaches — including several that occurred about the time last fall that the agency was already under fire for its mistakes.

The most dramatic finding involved new details surrounding an incident at the Congressional Black Caucus Foundation’s awards dinner in Washington on Sept. 27, 2014, in which a man gained entry by posing as Rep. Donald Payne Jr. (D-N.J.). The man got backstage past a distracted Secret Service staffer and then was escorted to meet and talk with Obama. The impersonator’s entry to the event was reported at the time but not that he got so close to the president.

That incident came just days after a knife-wielding fence jumper had been able to race into the East Room of the White House. And it followed another high-profile breach, when an armed Centers for Disease Control and Prevention contractor with an arrest record was able to step onto an elevator and stand within arm’s reach of Obama.

The new investigation also found that in October 2014, a day after Julia Pierson resigned under fire as director, a woman got backstage at the Congressional Hispanic Caucus Institute’s gala being attended by the president.

Seven days later, the House inquiry found, an employee was allowed to enter a Los Angeles hotel where Obama and senior adviser Valerie Jarrett were staying without being properly screened for weapons or having his bag checked.

In April 2013, four people went fishing on a small lake in the back yard of Vice President Biden’s Delaware home and were not discovered until neighbors called the Secret Service to report the security breach. The alarm system at Biden’s home had been failing for some time.

In spring 2014, a Czech citizen with an expired visa entered the property of former president George H.W. Bush and stayed for an hour without being detected.

The report blasted Secret Service officials in several instances for failing to examine its own mistakes and asserted that Clancy and some of his predecessors had provided Congress with information that was false and misleading about the extent of problems.

The report said Clancy gave inaccurate information about the incident involving the man on the elevator with Obama when he said no other armed security contractors came within close proximity to the president. But an internal review of the breach suggested that there were several unscreened and armed guards in the area.

The report noted that after the Secret Service took four days to discover that bullets from the November 2011 shooting had struck the White House residence, the agency’s inspection team did not immediately open a file on the case. The division instead opened a file in October 2014, only after a Post report the previous month detailed the agency’s handling of the incident, the report says.

Congressional investigators criticized testimony from former Secret Service director Mark Sullivan after the April 2012 scandal in which 13 agents were implicated in bringing prostitutes back to their hotel before the president’s arrival in Colombia.

Sullivan, appearing about a month after the episode, assured lawmakers that the behavior of the agents and officers involved did not point to a larger cultural problem in which such behavior was tolerated by managers. But the investigation found that several agency employees had previously acknowledged to Secret Service investigators that they had engaged in similar misconduct elsewhere, including having had sex with foreign nationals in Italy, Russia, Ireland and New York City.

The report cited a number of colorful e-mail exchanges between Secret Service staff suggesting that arranging liaisons with prostitutes was a widely known and accepted practice. Before the Colombia trip, one senior supervisor e-mailed 54 employees, cracking that the motto of the trip was “Una Mas Cerveza Por Favor,” Spanish for “one more beer, please.” In another note, an agent wrote to a colleague, “Swagg ­cologne-check…Swagg sunglasses-check…”

The report said that the openness of the communication indicates that the Secret Service employees “did not believe their misconduct would be punished.”

The report said Clancy could move the agency forward but is hampered by being a 27-year veteran of the Service.

“The Committee believed — and still does — that new senior leadership from outside the agency would be best positioned to enact the reforms that the agency desperately needs,” the report said.

“USSS leadership needs to honestly acknowledge the problems plaguing the agency . . . because only then can the agency truly set about moving in the right direction.”