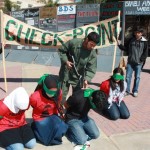 A varied group of 14 organizations has issued a letter to more than 2,500 U.S. colleges and universities that urges them to protect Jewish students on campus in light of rising anti-Semitism in America and abroad.

The organizations-including Alpha Epsilon Pi, AMCHA Initiative, American Association of Jewish Lawyers and Jurists, Americans for Peace and Tolerance, Christians United for Israel, Committee for Accuracy in Middle East Reporting in America (CAMERA), David Horowitz Freedom Center, Hasbara Fellowships, Institute for Black Solidarity with Israel, Louis D. Brandeis Center for Human Rights Under Law, Scholars for Peace in the Middle East, Simon Wiesenthal Center Campus Outreach, StandWithUs, and the Zionist Organization of America-say in the letter that “none of us should tolerate a campus climate of fear or disrespect, which can seriously impair the physical and psychological health of students and create conditions that negatively affect their learning and their ability to achieve their full potential.”

In particular, the letter raises concern over the actions of the anti-Israel campus group called Students for Justice in Palestine (SJP), which the letter’s signatories note has a history of “harassing and intimidating Jewish students.” The letter goes on to cite several incidents on campuses, including a recent one at Temple University in which a pro-Israel student was physically and verbally assaulted by SJP members, as well as SJP’s planting of anti-Israel mock eviction notices under students’ dorm rooms.

“While justifying its hatred and bigotry as protected under the First Amendment, the SJP employs tactics geared to silencing and marginalizing the views of Jewish students who support Israel,” the letter says.

The letter also cited that these schools are responsible for protecting Jewish students from anti-Semitism under Title VI of the Civil Rights Act.

“Jews around the world are being held collectively responsible for Israel’s actions, which are defensive and undertaken to protect its people,” says the letter. “This is anti-Semitism, according to U.S. government standards.”