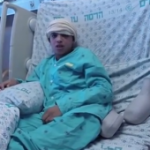 The 13-year-old terrorist who Palestinian Authority President Mahmoud Abbas claimed had been murdered by Israel is now at the center of a different controversy, Israel’s Walla news reported.

Ahmed Manasra, the pubescent Palestinian who, together with his 15-year-old cousin, Hassan Manasra, went on a stabbing rampage in the northern Jerusalem neighborhood of Pisgat Ze’ev on Oct. 13, is back in the headlines, this time surrounding the issue of his arrest, indictment and sentencing.

According to Israeli law, anyone under 13 years of age cannot do jail time. Because Ahmed turns 14 in January, his lawyer is trying to speed up the legal process, to keep his client out of prison. According to Walla, attorney Muhammed Mahmoud’s strategy is for Ahmed to confess to the crimes of which he is accused on the same day that he is indicted, and to request that his sentence be meted out as soon as possible.

A criminal lawyer in Jerusalem, who requested anonymity, told The Algemeiner on Sunday that, according to the Israeli penal code, minors under the age of 14 who commit serious crimes cannot serve time in prison. Rather, he said, they are sent to a treatment facility. Once they are 14, however, they can be sentenced to juvenile prison.

To complicate matters further, he said, “Even if he ends up being sentenced to juvenile jail, Manasra is liable to be released when he is 18.”

Ahmed Manasra and his cousin, Hassan Manasra, carried out the stabbing attack that left a 13-year-old Israeli boy, who had been out riding his bicycle, and a 25-year-old Israeli man, seriously wounded. Hassan was killed by security forces during the attack. Ahmed has been treated at the Hadassah Medical Center on Mount Scopus – the same hospital where the Jewish boy he stabbed is still fighting for his life — for injuries he sustained when hit by a car as he was fleeing the scene.

In an address to his people that was broadcast live on P.A. TV, Abbas accused Israel of having “executed” Ahmed.

According to Israeli Health Minister Yaakov Litzman, Abbas had conspired with Ahmed’s parents to claim that their boy had been killed in cold blood by Israeli security forces — and for this reason the family refused to let the media photograph him alive and well.

When video footage emerged of Ahmed, lying in an Israeli hospital and being spoon-fed by Israeli medical personnel, Abbas was widely criticized across the Israeli political spectrum for engaging in what amounted to a “blood libel.”