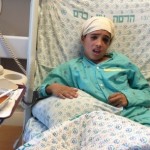 Thirteen-year-old Palestinian terrorist Ahmed Manasra, who together with his cousin stabbed and critically wounded an Israeli boy in Yerushalayim earlier in October, was charged with two counts of attempted murder on Friday.

Manasra made headlines when Palestinian Authority President Mahmoud Abbas claimed in an Oct. 14 speech that the boy had been “executed” by Israel. In reality, he was being treated at an Israeli hospital.

On Oct. 12, Manasra and his 15-year-old cousin stabbed a man, 20, who was walking along a Pisgat Ze’ev street, and then a boy, 13, as he was getting on his bicycle after exiting a candy shop. Both victims survived the attack.

The indictment said Manasra had met his cousin, Hassan, on his way home from school that day. The two “talked about the situation at Al-Aqsa mosque, the living conditions in Gaza, the Palestinian Authority and Hamas, and decided to be shahids (martyrs)—to be killed in the battle for Islam by way of committing a stabbing attack in an effort to kill Jews,” the indictment said.

The prosecution is expected to face a number of legal hurdles in prosecuting Ahmed Manasra because Israeli law does not allow courts to hand down prison sentences to children under the age of 14. Since Manasra will turn 14 in January, the prosecution is considering delaying the trial.