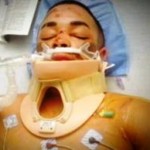 An undercover cop and 10 others have been indicted for their involvement in the motorcycle mob attack that was captured on video in September.

NYPD Detective Wojciech Braszczok faces up to 25 years in prison if convicted for his part in the attack on a Range Rover in Manhattan.

All the bikers except for Christopher Cruz, who is accused of stopping short in traffic on purpose and got rear-ended by the Range Rover, face gang assault charges that could result in decades in prison. Cruz faces felony level criminal mischief and up to four years in prison.

In the September attack, bikers smashed the windows of the Range Rover which contained Alexian Lien and his wife and young child, chased the car into the streets, then dragged Lien from his car and beat him. Read more.