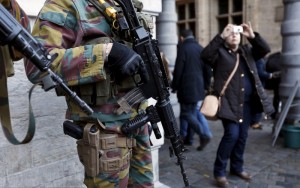 A tenth suspect was arrested Thursday in connection to the Nov. 13 Paris terror attacks after a police search in Brussels allegedly yielded cellphone evidence.

The suspect, identified only as Ayoub B., was charged “with terrorist murder and participation at the activities of a terrorist organization,” a Belgian prosecutor said in a written statement.

The individual is expected to appear before a judge within the next several days to determine whether he should be held in preventive detention.