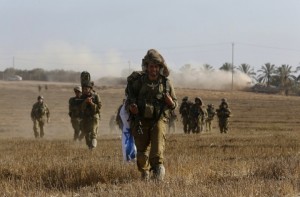 The Israeli cabinet approved the mobilization of 10,000 IDF reservists, following two days of a continuous barrage of rocket fire by Hamas. The terror group broke the latest ceasefire on Tuesday with a salvo of medium-range rockets on Be’er Sheva, followed by dozens of volleys at targets throughout southern and central Israel. Meanwhile, cabinet ministers have begun to call for a ground offensive aimed at recapturing Gaza.
The rocket fire has continued throughout Wednesday and Thursday, with over 200 launches from the Gaza Strip since the latest outbreak collapsed negotiations that had been progressing towards a long-term truce between Israel and Hamas.
The sudden and powerful return to violence by Hamas has exasperated members of the Israeli cabinet, several of whom have called for a renewed ground offensive and even the recapture of the Gaza Strip. On Wednesday, housing Minister Uri Ariel told Israel’s Channel 2 News that “the actions until now did not bring quiet. It’s clear there is no choice but a ground offensive.”
Communications Minister Gilad Erdan told Israel Army Radio today that the resumption of rocket fire from Gaza has inched Israel closer than ever to a decision to fully retake the territory. “Will this happen tomorrow? It’s not certain, since the price for this will be high, but we are closer today to a ground operation than we have been at any point since the start of the operation,” said the minister.