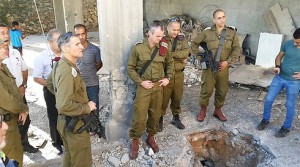 Some 100 rockets were fired today since midnight on Motzoei Shabbos from the Gaza Strip at Israeli territory. 91 of the rockets fired fell inside Israel, while 6 were intercepted by the Iron Dome.

One rocket was intercepted over Sderot on Sunday afternoon, with shrapnel hitting a road in between houses, causing damage to vehicles and structures. One woman suffered from shock. Three rockets were shot down over Sha’ar HaNegev, while two others fell outside communities in the regional council. Seven rockets hit the Eshkol Regional Council, two of which hit a cowshed, killing several cows. Five rockets hit Sdot Negev, while 1 hit an open area in Hof Ashkelon.

Roughly an hour and a half after the mortar attack on the Erez crossing, a rocket was intercepted over Ashkelon in the early afternoon hours, while another fell in Eshkol and one exploded inside a Sdot Negev Regional Council community. Shortly afterwards another rocket was intercepted over Hof Ashkelon. Two other rockets hit outside a Sdot Negev Regional Council.

Additional rockets were then intercepted over Ashdod and Be’er Tuvia while another caused damage to a structure in Eshkol.

At around noon a rocket exploded in open area in the Tel Aviv metropolitan area, while at least eight hit open areas in Sha’ar HaNegev in less than half an hour. Two more rockets were intercepted over Be’er Tuvia, not far from Ashdod, while Eshkol was hit by three more.

The Eshkol Regional Council came under heavy fire in the early morning hours, with three rockets hitting a community, causing light damage to a house, a greenhouse and some cars. Later rockets were intercepted over Ashdod and Sderot, while more rockets fell in Eshkol.