Speaking on video circa 2006, Rabbi Gabi Holtzberg is happy, at ease. There’s a lot going on around him—the noise of guests, children, dishes being stacked away. For him and his wife, Rivky, that was home.

“We plan to buy the building, G‑d willing,” he says, swinging his hand up towards the floors above.

The building was called Nariman House, a new construction on a little alley in the Colaba district of Mumbai. It was safe, out of the way, an attractive modern building but not too high-profile, perfect for the recently founded Chabad-Lubavitch of Mumbai.

On video, Gabi shares his plans. The first floor would house a restaurant, the second a synagogue, library and Internet lounge. 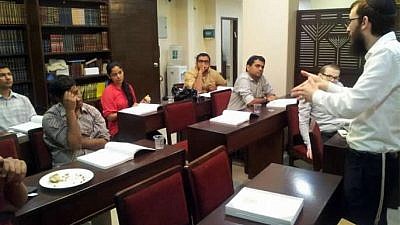 “The third floor will be a school for children,” he says, “and the fourth floor for staff—students, teachers.”

The Holtzbergs would indeed purchase the building, but Gabi and Rivky never got the chance to open the Jewish school in Mumbai that they had hoped for: In November of 2008, the couple, together with four Jewish guests, were taken hostage and brutally killed by Pakistani Muslim terrorists who had stormed their Chabad House as part of the devastating 26/11 attacks, which left 164 dead in all.

In 2013, Rabbi Yisroel and Chaya Kozlovsky arrived as the new permanent directors of Chabad of Mumbai. A year later, the Chabad center at Nariman House—rebuilt, refurbished and with high-tech security features incorporated—finally reopened. The building and the Chabad activities hosts serve as a living memorial to the Holtzbergs’ mission in Mumbai—work the Kozlovskys see themselves continuing.

“We are building Gabi and Rivky’s dreams,” says Rabbi Kozlovsky. “I see that every day.” 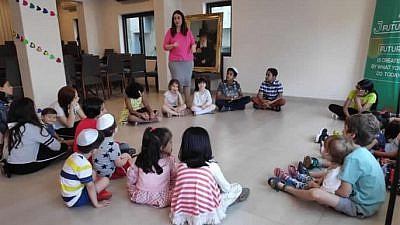 Like Jewish Academy of Mumbai, which the Kozlovskys opened four years ago. A Jewish school in the city had been one of Gabi and Rivky’s earliest, unfulfilled dreams. That, combined with the pressing need for quality Jewish education in Mumbai, made Jewish Academy a priority, despite the financial burden it would place on Chabad.

“We wanted our son to have a strong connection to his Jewish roots,” explains Chen Jacobs, whose 12-year-old, Ronen, has attended Jewish Academy for the past two years. Before that, he went to Chabad’s Sunday school, but Chen and his wife, Sylvia, felt it wasn’t enough. “We tried to [instill] Jewishness at home as much as possible, we felt it necessary that he attend Jewish school. The daily prayers, kosher food, Jewish history … we see a big change in the way our son is growing up.” 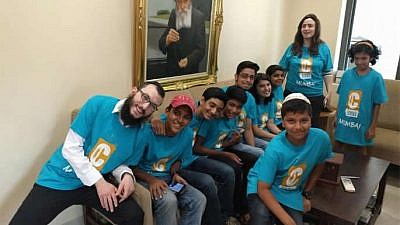 The Kozlovskys direct Mumbai’s new CTeen chapter, which the Bloys will help lead once they arrive in India. Credit: Chabad.org/News.

Jewish Academy opened as a day-care center, but as enrollment grew and word spread about its stellar academic standards—a top priority for parents in India (the school follows an International General Certificate of Secondary Education, or IGCSE, curriculum)—it has turned into a full day school.

With the expansion of the school, a new emissary couple, Rabbi Uri and Mushki Bloy—together with their 3-month-old daughter, Rochel—are preparing to move from New York to Mumbai to help see that Gabi and Rivky’s dream turns into a reality.

Mushki Bloy remembers the Mumbai attacks well. She was 14 at the time, a freshman at Beth Rivkah High School in Brooklyn, N.Y., and she and her classmates stayed up for days on end following the news and whispering psalms. She recalls waking up at 5 a.m. to tearfully watch the Holtzbergs’ funeral, streamed live from Israel. 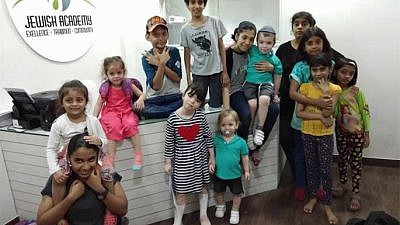 Bloy is a child of Chabad emissaries. Her late father, Rabbi Moshe Freedman, directed Chabad of Bahia Blanca, Argentina—work her mother, Sarah, continues doing so. Bloy grew up an eight-hour drive away from the nearest large Jewish community, Buenos Aires, and as a child attended the Shluchim Online School. She had dreamed of becoming an emissary one day, but had her limits.

“I said that I would go anywhere but Mumbai,” she says. “Even somewhere in India, but not Mumbai.”

But then her husband, Uri, heard that the Kozlovskys were searching for a couple to join their team in Mumbai.

“Shlichus is not about the little details,” says Mushki, describing how her thinking changed. “We go where we are needed.”

And the need is there. Rabbi Bloy will be tasked with giving more adult Torah classes, working with tourists who come through Nariman House—home to Mumbai’s single kosher restaurant—and in addition to teaching at the school, Mushki will offer women’s classes. The couple will also lead the city’s new CTeen (Chabad Teen Network) chapter. Jewish Academy, however, will be their focus.

The ancestors of today’s Bene Israel Indian Jewish community arrived on the subcontinent thousands of years ago—victims, according to legend, of a shipwreck. A few hundred years ago, they were joined by a community of Jewish merchants originating in Baghdad. Both communities thrived, although as a rule did not mix. Their combined population reached a 1940s peak of some 30,000 Jews, with the Bene Israel making up the lion’s share. Vast amounts of India’s Jews emigrated to Israel in the decades since, and by most estimates, today there are in the neighborhood of 3,000 to 4,000 Indian Jews living in the country, mostly in Mumbai. 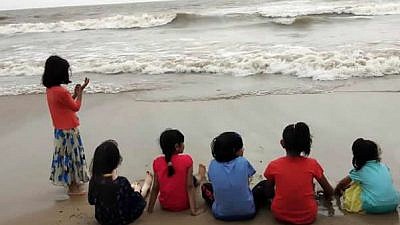 Children get some learning time at the beach. Credit: Chabad.org/News.

When Chen and Sylvia Jacob were growing up in the early 1990s, there were still 10 to 15 Jewish children in each class of the school they attended. But increasing emigration means that most Jewish children do not attend a Jewish school, their education supplemented either at home, at Hebrew school or the occasional pre-holiday program. “That’s what we found lacking for our son,” says Chen Jacob.

Thus, Jewish Academy’s 19 students—mostly from Indian Jewish families, but also including some Israeli expats—is quite a feat. The school is not located in the Chabad House, which Rabbi Kozlovsky says is far too small to manage that, and recently moved into a brand-new rented space.

The Jacobs’ have been thrilled by the impact the school has had on their son. 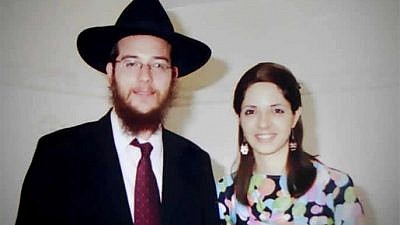 “On his birthday, my son said he wants to wear a kipah all the time, and now he does that even when he goes out anywhere,” says Jacob. “We’ve seen changes in his Hebrew. Next year will be his bar mitzvah, which we plan to have at the Chabad House, and he’ll understand what he is reading, what the tefillin mean. It won’t be a scary experience for him; he’ll understand.”

There has been growing interest within the community for a school. Jewish Academy’s serious secular-studies program is impressing prospective parents, and Jacob explains that in a culture and society where change comes slowly, perceptions are changing.

“It used to be that a job in the government sector was a dream job here; it had set times, it was secure, a good pension,” he says. “Now people here are taking more risks, there are more startups. And it’s the same thing in education; parents used to want exactly what they got, to stick to the old standards and methods of education. With changing times, they see it doesn’t have to be that way. Our generation of parents are more open to change.” 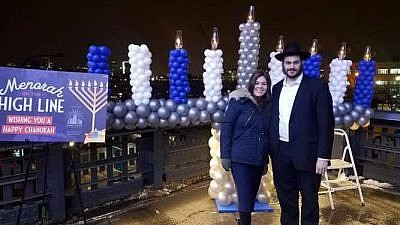 Rabbi Uri and Mushki Bloy will soon move to India to assist with Chabad of Mumbai’s activities. Credit: Chabad.org/News.

Before Rosh Hashanah, the Kozlovskys held an open house and a shofar-making workshop in the Thane neighborhood—an area with a concentrated Jewish community—attracting more than 40 children and their parents. The Indian school year begins in June, and the rabbi says they are expecting a jump in registration for the new academic year.

Jacob says that when he and his wife came to the conclusion that they wanted Ronen to have a full-time Jewish education, they wanted to make sure they would not have to begin searching for a new school in two years. It was the Kozlovskys’ dedication to the vision of the school that convinced them that Jewish Academy was right for their family.

“With their passion, commitment and sincerity, they aren’t going anywhere. They are continuing to build this school and make sure it’s here for years to come,” he says. “It is not, ‘Here today, gone tomorrow.’ They are treating our children as they are treating their children, thinking about each one’s future.”

This article originally appeared on Chabad.org/News.