This past week, when the biography of Rabbi Moshe Sherer went to press, the excitement in the ArtScroll office was palpable. Many ArtScroll staffers had personally known Rabbi Sherer, who led Agudath Israel of America for over four decades, and who was arguably the most effective Jewish lay leader of his time. They had experienced firsthand his warmth and caring; they had seen his rock-like dedication to the principles of emunas chachamim and selfless service to the Jewish people, as well as his wisdom.

Capturing both the achievements and the personality of a man as talented, energetic, and multi-faceted as Rabbi Sherer was a challenge – and a pleasure, says author Yonoson Rosenblum, biographer of such luminaries as Rabbi Yaakov Kamenetsky, Rabbi Eliyahu Dessler, Rabbi Shraga Feivel Mendlowitz, and Reb Elimelech Gavriel (Mike) Tress. Reb Yonoson interviewed over 100 people before beginning to write. He spent hours poring over Rabbi Sherer’s 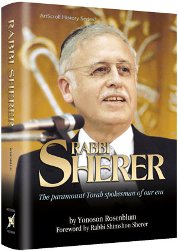 thousands of letters, memos, and notes, as well as boxes of transcripts of the “aides-memoire” that he dictated at the end of every event-filled day. “Rabbi Sherer had an eye to the future and a sense of history – a biographer’s delight,” says Yonoson.

Rabbi Sherer was at home in many worlds. He was the servant and confidant of great Torah sages and a friend and adviser of people in the highest echelons of power, but he was attentive to the needs of the humblest Jew. Much that we take for granted today was shepherded by him through Congress and the courts. Even more: He rescued Torah life from the American melting pot, and helped build it into the vibrant and growing entity of today.

In this beautifully crafted biography we learn about both the public and private Rabbi Sherer. We meet those who inspired him and shaped him: his mother; his mentor, Mike Tress; and two generations of gedolei hador. We get an inside look at governors, mayors, and legislators – even Presidents. We go behind the scenes of the legal battles to strengthen Torah life and secret activities to rescue Jews in danger.

This is a book of history, but it is much more; it is a life-transforming work. As Yonoson Rosenblum says, “No one can read this book and not know what his responsibility is to each and every person, and each and every Jew, that he meets.”