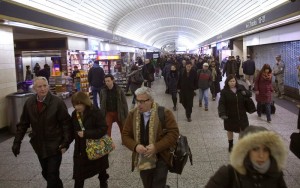 At least one person is dead and two others injured in a shooting at New York’s Penn Station Monday morning.

Initial reports say the shooting may have started inside one of New York’s busiest transit hubs before going out into the street. The incident occurred around 6 a.m.

Update: An argument that began inside a midtown Manhattan McDonald’s restaurant early Monday erupted in gunfire at the steps of a nearby subway entrance when a gunman shot three men, one fatally, near Penn Station, authorities said.

The three victims, all men in their 40s, were drinking coffee when a heavy-set man in a black hooded sweatshirt engaged them in a brief conversation, left the restaurant and then waited for them to exit, following the group into a subway station, where he fired four times, New York Police Department Chief of Detectives Robert Boyce said.

The shooting occurred in the entrance to the subway, not in the transit system itself, in an area where there are no security cameras, Boyce said. Read more at ABC News.