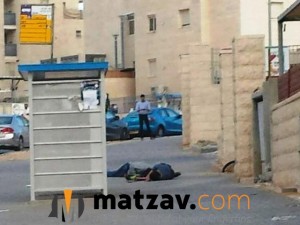 One of the terrorists who carried out this morning’s terror attack in Ramat Beit Shemesh Gimmel was a known Hamas operative who had previous run-ins with the Israeli authorities.

The other terrorist had been jailed in Israel between 2012 and 2014 after being apprehended with a knife near the Meoras Hamachpeilah in Chevron.

One person was lightly to moderately wounded in the stabbing attack, an attack that could have been worse had it not been for the quick response of the Israeli security forces and vigilant civilians.

Just before 8 a.m., the two terrorists tried to board a school bus in Ramat Beit Shemesh, but were pushed off by civilians. The two then continued toward the Kol Yehuda shul and pounced on an 18-year-old bochur just outside the building. The bochur was stabbed in his upper body. Police officers dispatched to the scene shot and killed both perpetrators. Both terrorists were 20 years old.

The initial investigation into the event revealed that the police fielded a call early Thursday warning of a suspicious man in Ramat Beit Shemesh. Police officers were dispatched to the area and began searching for suspects. At the same time, another report came in about two suspects trying to board a bus transporting children to an area school. The two reportedly disembarked when people began yelling at them and asking them what they were doing, and they were later found near a bus stop. The police fired at them while they were stabbing their Israeli victim. According to police, the terrorists had been wearing shirts bearing symbols associated with Izzedine al-Qassam Brigades—Hamas’s armed wing.