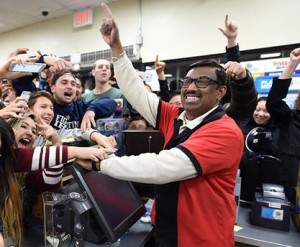 The eye-popping and unprecedented Powerball jackpot whose rise to $1.6 billion became a national fascination will be split three ways.

The winners’ identities remain a mystery, but they bought their tickets in Florida, Tennessee and a Los Angeles suburb.

The winners of the world-record jackpot overcame odds of 1 in 292.2 million to land on the numbers drawn Wednesday night, 4-8-19-27-34 and Powerball 10. They can take the winnings in annual payments spread over decades or a smaller amount in a lump sum.

The 7-Eleven will get a $1 million bonus for selling the winning ticket, Traverso said.

No details were immediately available about the Florida winner.

The estimated jackpot amounts had risen steadily since Nov. 4, when it was reset at $40 million.

Powerball tickets are sold in 44 states, as well as the District of Columbia, the U.S. Virgin Islands and Puerto Rico.