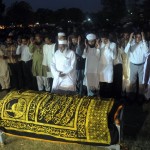 Muhammad Shakil Auj, a liberal Muslim scholar accused of blasphemy, was shot dead in Karachi on Thursday. Auj was accused of the crime by four other professors after giving a speech in the U.S. in 2012 as well as for his liberal views, such as the idea that Muslim women should be allowed to marry non-Muslim men. He was shot in the head and neck by gunmen on a motorbike. Auj had previously complained to police about death threats.

Blasphemy is punishable by death in Pakistan, and in recent years there has been an uptick in vigilante killings related to accusations. Auj had written 15 books about Islam and last month was awarded the presidential medal of distinction in Pakistan for education and research. Read more at New York Times.