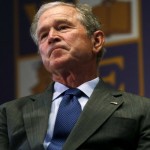 “I just dont like the guy,” Bush reportedly said Sunday night at a fundraiser for his brother Jeb Bush in Denver.

Cruz, who served as a domestic policy adviser for Bush on his 2000 campaign, has ripped the former president’s record and criticized elements of his foreign policy in his book published earlier this year. Read more at Politico.