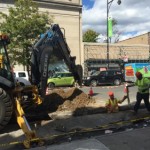 Borough Park residents woke up this morning to rumors that 13th Avenue was closed for construction on the shortest erev Shabbos of the year, JP Reports.

Whatsapp, the social media application which became the standard form of communication throughout the community, featured pictures of heavy equipment working on the streets. In addition, posts were distributed to alert the community of the traffic, while mocking anAll Postsd thanking Councilman David Greenfield and Community Board 12 for repairing 13th Ave. on such a short Friday.

“People were very frantic, saying that construction was being done from 13th Ave. and 44th St. to 55th St,” Community Board 12 District Manager Barry Spitzer told JP. “I got into my car and drove around and didn’t see anything. I drove from 37th St. all the way to 60th St. and didn’t see what people were complaining about.”

Spitzer said he received calls and Whatsapp messages Friday morning in the form of complaints about 13th Ave. being shut down for construction.

He added: “We weren’t aware of anything going on, and there was never a plan to shut down 13th Ave. for the entire day, let alone for part of Friday.”

Spitzer went on to explain that he saw some construction between 38th St. and 39th St., but was out of the impact zone for traffic. In addition, he acknowledged that there might have been some construction going on early in the morning around 7 a.m.

“It’s possible, but we’re unsure. We wouldn’t allow any construction on Friday,” the district manager said.

JP previously reported that Councilman David Greenfield and Community Board 12 Chairman Yidel Perlstein worked out a construction plan with the contractors to cease its work Fridays back in October, given the fact that people need to take care of necessary tasks before the commencement of Shabbos later in the afternoon.

“We have an agreement with most agencies not to do construction, but there’s obviously no law that prohibits construction in Borough Park,” Perlstein said in an interview. “It’s more about respect for the Jewish community.”

Perlstein urged community residents that use Whatsapp, not to use it as a “credible source.”

“If you want concrete evidence, people should reach out and call the community board for answers,” he said.

JP investigated the culprit behind the initial warnings of construction on Whatsapp and found that a paid state staffer of Assemblyman Dov Hikind’s office had re-posted the construction rumors over the app. It’s still uncertain as to who started the rumors.

Leave a Reply to Yup believe it or not Cancel reply