It is difficult to get even a small handful of Knesset members to attend an event, yet a diverse dozen of them gathered Tuesday morning in the Knesset’s Jerusalem Hall for a special two hour-plus symposium on U.S.-Israel economic and diplomatic relations. The “U.S.-Israel Business Alliance” mission was arranged by the U.S. based Orthodox Jewish Chamber of Commerce, and headlined by its special guest, former Arkansas governor and presidential candidate Mike Huckabee.

You can hear a pin drop in the room throughout the symposium. The sensitivity of the times was felt in the air. We were mere days after the UN Security Council passed – with the aid of U.S. abstention -Resolution 2334, which delegitimized Israeli settlement in East Jerusalem, Judea and Samaria, and Secretary of State John Kerry delivered a speech denying Israel’s ability to remain a democratic Jewish state. At the same time, we are just over two weeks away from when Donald Trump will be inaugurated as president of the U.S., which is expected to significantly affect U.S. policy towards Israel.

Crucial Support at a Crucial Time

Speaker after speaker thanked Governor Huckabee and the entire Jewish Chamber delegation for displaying unapologetic U.S. support for Israel at this crucial juncture. The governor has visited Israel more times than he can remember since age 17, and has been a strong pro-Israel voice during his political career and the many media appearances he makes to this day. The governor and his wife Janet previously visited the Jewish State in 2014, as rockets were raining down from Gaza. The nickname “Huckabee the Maccabbee” was an instant favorite in the room. The fact that Governor Huckabee has a particularly close relationship with incoming President Trump was particularly heartening.

Likud MK Miki Zohar, who chaired the conference, highlighted the UN resolution’s boost to the BDS movement and danger to the Israeli economy, and thanked the Jewish Chamber for harnessing its clout to fight BDS and promote stronger U.S.-Israel economic ties. Zohar praised President Elect Trump’s response to the recent anti-Israel moves by the UN and his predecessor, remarking, “I am filled with optimism for January 20th,” the date Mr. Trump will take over the Oval Office.

Dr. Frager noted that this is the fifth time that he has accompanied Governor Huckabee on a trip to Israel, but the first time under the Jewish Chamber’s umbrella. The current thirty person-strong delegation and high profile schedule of events made a strong mark. “Let’s hope this sets the tone for the next eight years under President Trump,” said Dr. Frager.

Mr. Honig noted the Jewish Chamber’s particular motivation to utilize its global network of Jewish community businesses and business leaders to fight BDS and other efforts to harm the Israeli economy. “An eye for an eye,” he stated with visible passion. “We’ll use our strength to fight you all.” Mr. Honigadded the importance for Israel and the Jewish people to recognize and respect the biblical traditions and laws, in order to be able to expect the world to respect our historical biblical connection to the land. He also highlighted the strong personal connection that the Jewish Chamber maintains with top aides to President Elect Trump, particularly Jason Dov Greenblatt Esq., and Israel Ambassador designate David Friedman.

The last member of the Jewish Chamber’s Executive Public Policy Committee to speak was Odeleya Jacobs. She noted the months of work that were invested to arrange this event and the importance of the mission. “The Jewish people are indigenous to this land,” she exclaimed. “No power can go against God.”

Aaron Klein, chief of the Jerusalem bureau of Breitbart News, sounded the alarm on the BDS movement, which the UN resolution “put on steroids,” and urged the MKs to ensure that the Israeli government makes a full throated effort to combat the movement and its key backers. He urged them to follow the direct, combative model that led to the stunning political success of Donald Trump. “Troll the world with the truth,” Mr. Klein advised.

Efrat Mayor Oded Ravivi praised Governor Huckabee’s understanding of the threat of the BDS movement and how to counter with an effective pro-Israel message to the media and the world. He then presented the governor with a framed map of Israel, remarking, “We trust you because you know what this is about.”

The MKs at the symposium each voiced their own thoughts during brief addresses. The most commonly touched upon themes were gratitude towards Governor Huckabee and the Jewish Chamber for their support; outrage at the UN and the Obama administration; optimism of better days ahead under the Trump administration; the importance of biblical tradition and history to the Jewish connection to all of Israel; and opposition to the creation of a Palestinian state.
The Huckabee Finale

During her remarks, Likud MK Sharren Haskel pointed out that Governor Huckabee has more courage voicing a staunch pro-Israel position than even many Israelis. The audience was clearly moved at the governor’s unflinching words of support during his address, which concluded the symposium.
Repeating the mantra that “history is to a nation what memory is to an individual,” Governor Huckabee extolled the people of Israel to appreciate the strong historical Jewish connection to the land, and help the world at large appreciate it too. He described his initial reaction to Secretary Kerry’s speech as one of disbelief. “It only makes any sense if you take faith and religion out,” he said.

Though the only non-Jew in the room, Governor Huckabee harped on his strong religious faith and how it shapes his view of Israel. “When I first came here, Israel was struggling to live of kibbutzin, but is now one of the most entrepreneurial nations in the history of mankind; and won many wars it shouldn’t have (by conventional measure),” the governor explained. “There is no explanation for this other than God’s unique personal involvement.”

The governor reiterated his belief that Israel has rightful sovereignty over Judea and Samaria, and warned that abandoning portions of land won’t satiate Israel haters. “The world doesn’t hate you because of where you are, but because of who you are and whose you are,” he exclaimed.

As a close friend and early supporter of President Elect Trump, Governor Huckabee boosted the already strong sense in the room that the next president will be nothing like his predecessor regarding Israel. He concluded with a powerful message to the world: “Say what you want about Israel, but I wouldn’t bet against her!” 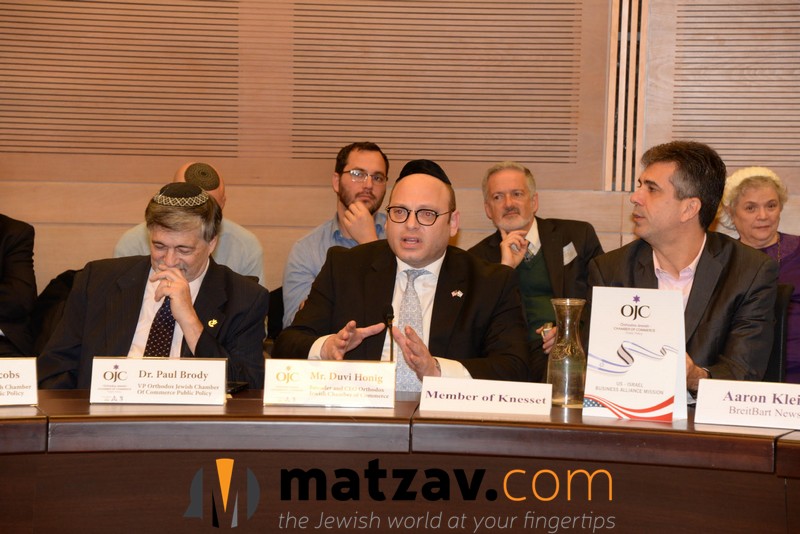 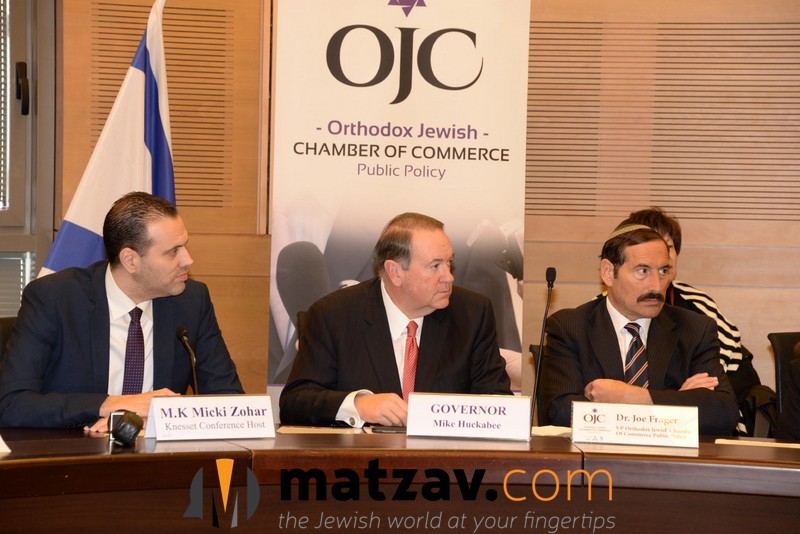 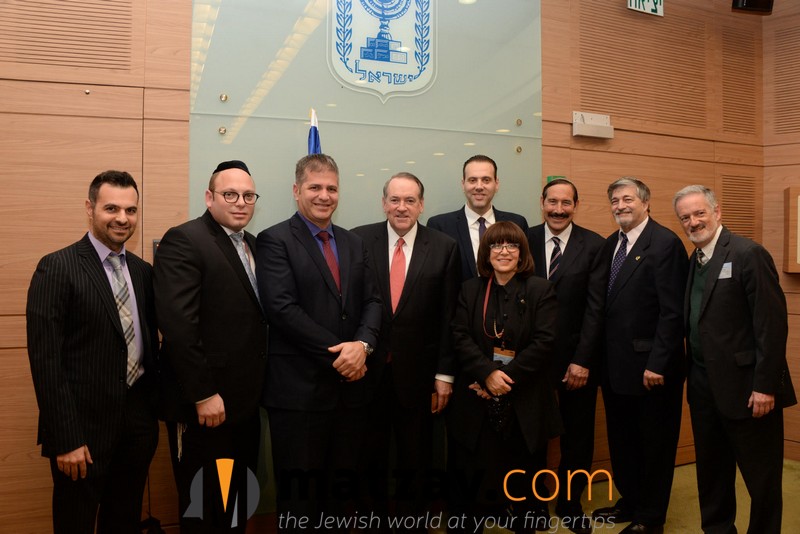