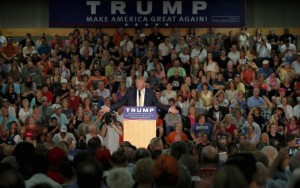 [Video below.] At a New Hampshire town hall, Donald Trump was asked about about getting rid of radical Muslims by an audience member. He said “we’re going to be looking at that.”

Trump also encouraged the audience member to ask the question about whether Obama is a Muslim.

“That’s my question. When can we get rid ‘em?” the man said after.

“We are going to be looking at a lot of different things. A lot of people saying that,”Trump responded.

Trump later provided a statement to The Washington Post which said: “The media wants to make this issue about Obama. The bigger issue is that Obama is waging a war against Christians. Christians need support in this country. Their religious liberty is at stake.”