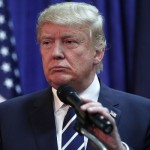 If Hillary Clinton were a Republican, she would “already be in jail” over the issues surrounding her use of a private email server, presidential candidate Donald Trump said Thursday, and it will probably take a Republican president to be elected to make her face charges.

“Had there not been a [Gen. David] Petraeus, and you know, the catastrophic events that happened around him, it would be a different story,” Trump, who is at the top of most major national polls, told MSNBC’s “Morning Joe” program. “If this were a Republican, somebody would already be indicted.”

Clinton’s decision to use a private server, said Trump, is “very serious” and “probably criminal. I think almost you could say, almost certainly criminal. And it looks to me like she’s not going to be prosecuted. And that’s only because the prosecutors are Democrats.”

Trump said that Petraeus, the former CIA director who was fined and sentenced for sharing classified documents with his biographer, has seen his life destroyed, “but it’s like nothing seems to be happening with her, so the world is watching.”

He also compared Clinton’s case to that of former Virginia Gov. Robert McDonnell, who was sentenced two years in prison for taking money and gifts in exchange for promoting a dietary supplement while he was in office.

“He didn’t violate a state law,” said Trump. “The Justice Department decides to go after him and puts him in jail for five, six, seven, eight years.”

If a Republican becomes president, Trump said, “hopefully” Clinton will face charges, but then “you have a statute of limitations of five or six years. Hillary might have to win this election because if a Republican wins, I would imagine that their attorney general and their people are going to be their various prosecutors, because it goes on for years after the election.”

So, as a result, Clinton “might be fighting for her life in more ways than one,” said Trump, as “what she did is probably criminal. I think almost you could say it’s almost certainly criminal.”