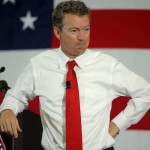 In the back of a car in Iowa, Rand Paul fielded questions from his supporters on Twitter. When asked if he thinks there is any difference between Hillary Clinton and Bernie Sanders, he deadpanned, “Well, I’m guessing they see the same hairstylist.”

Olivia Nuzzi of the Daily Beats reports that his answer was filmed by his campaign as part of #RandLive, an all-day live streaming event that is following the senator and Republican presidential candidate as he travels through the Hawkeye State.

Besides their hairdos, Paul said the two Democratic candidates are also similar in that they “believe government is the answer to most things, they think that taxes should be higher and there should be more regulations.”

A spokesman for Paul’s campaign did not immediately respond for clarification about what Paul meant by the comment.