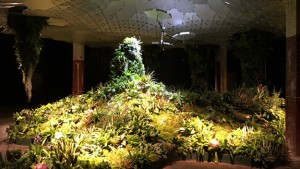 With new buildings rising into the clouds in Manhattan, how about a recreational space below?

The city’s first underground park is in the works on the Lower East Side. The Lowline Lab will open to explain how the future park will bring sunlight underground.

The High Line made a park out of old train tracks above the street in Chelsea in the Meatpacking District. The Lowline will turn abandoned underground train tracks into a park below Delancey Street.

The space was once a massive trolley terminal at the foot of the Williamsburg Bridge — built in 1908. It is about the size of a football field.

“For many decades, it’s been entirely unused, and all of the old architectural details are still there — the cobblestones and rail linesare all still around,” said Lowline co-founder Dan Barasch. “And what we’re hoping to do is to fuse that amazing history right below our street that’s hidden in plain sight with this futuristic vision of an underground park.”

The ambitious plan would bring life to the old structures with hundreds of plants — and deliver the sunlight they need.

“We have plants that are easier to grow like ferns and mosses,” Barasch told 1010 WINS’ Juliet Papa. “But then we’re also challenging ourselves with some edible food, actually. So we have a lot of pineapples, we have strawberries that we planted. We planted some mushrooms.”

In fact, there is even a pineapple growing here in a prototype planter inside the old Essex Street Market building — home to the Lowline Lab.

Barasch said the lab is both an experiment and a demonstration.

“We’re demonstrating and showing how the technology can work,” he said.

The sunlight from above ground is actually piped in with a series of pipes and mirrors to bring just the right amount of light to all of the plants in the lab. Fiber optics are set up as part of the delivery system — grabbing the light and shining it right into a cave beneath the plants.

The lab is just two blocks from the abandoned trolley station — which can be seen from the M and J Train platform at Essex Street.

The Lowline’s creators are hoping to raise $70 million to build the park and figure out the city’s role in it.

“It’s an underground park, so there isn’t any precedent for it,” Barasch said. “There’s nowhere for us in city government, so we have to come up with a creative solution.”