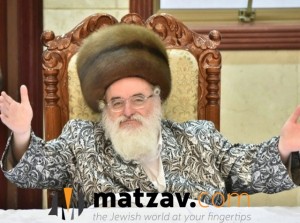 With the changing of the clocks several weeks ago and shkiah being earlier, the Vizhnitzer Rebbe, Rav Mendel Hager of Bnei Brak, has decided on changes for his kehillah in Bnei Brak: Seudah shlishis will be held each week at 7 p.m., after the conclusion of Shabbos.

This decision was made largely in light of the fact that davening on Shabbos morning at Rav Mendel’s bais medrash ends at around 1 p.m. Thus, with little time remaining to eat the seudah and daven Minchah, the decision was made to ‘extend’ Shabbos somewhat and hold seudah shlishis later.

According to the plan, after davening and a Kiddush, the Chassidim will daven Minchah and then have a chance to get some rest until seudah shlishis at 7 p.m.

Naturally, the time shift will also help neighboring Chassidim in Bnei Brak, who can come and participate in the seudah shlishis of the Rebbe, which, for them, will serve as melava malka.