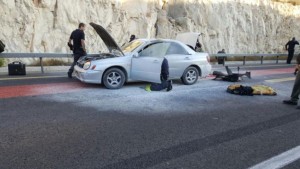 Davidi Asraf, spokesperson for the Yerushalayim Police District, says that the female terrorist who attempted a suicide bombing this morning near Maale Adumim, had planned to detonate the bomb in Yerushalayim, based on details of the investigation still under embargo.

Army Radio reports that the Palestinian bomber was pulled over by Israeli traffic police because she was driving on the highway in a lane reserved for buses and cars bearing multiples passengers.

The vehicle contained gas canisters, indicating that the bomber intended to carry out a large attack.

The incident took place on the main road to Ma’ale Adumim, a few miles east of Yerushalayim, about a half mile ahead of the al-Zaim checkpoint. The driver, a 31-year-old resident of Jaffa, approached the police officers and shouted “Allahu Akbar,” seconds before detonating a bomb.

The terrorist was seriously injured, with burns over her entire body, and currently receiving medical treatment at Hadassah Medical Center in Yerushalayim and is on a respirator.