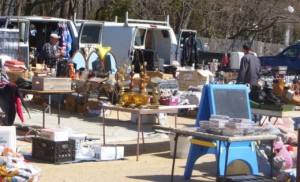 The Asbury Park Press reports: Lakewood, NJ – You can find almost anything at the Route 70 Auction & Flea Market — except, that is, an answer to the question that’s been swirling around the landmark business for months now.

Is the flea market going to shut down?

Its operators say no.

To underscore that point, Reynolds had a large sign put up at the entrance a couple of months ago. “FLEA MARKET HAS NOT BEEN SOLD!!!” it reads in red capital letters.

But there’s more to the story than that.

Technically, the sign is accurate. The business hasn’t been sold. Nor has the property itself, located just east of Route 9 in the southern end of town.

But Reynolds and his family don’t own the property; they lease it from the estate of Florian J. Lombardi. And a development company, Flea Market Developers LLC, currently has an application pending before the township Planning Board, seeking to build 166 townhouses and 8,000 square feet of retail space on the 21-acre site. The site sits in a highway development zone that allows for high-density residential and retail uses.

A public hearing on the proposal has been postponed a couple of times. It’s currently scheduled for Dec. 15. Miriam B. Weinstein is the Lakewood attorney representing Flea Market Developers.

If the project is approved, it could mean the end of the flea market’s nearly four-decade run and force the uprooting of some 750 vendors.

The flea market, which is open Friday through Sundays year-round and also Wednesdays during the summer, is one of three remaining at the Jersey Shore.

Read the rest of the report at the Asbury Park Press.