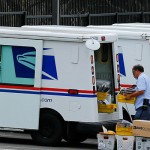 A funeral home has lost the ashes of a Holocaust survivor after posting them in the mail, a new court case claims.

Bertha Mueller died in her sleep at the age of 92 in Brooklyn, New York, on February 5 and was cremated days later.

Her daughter Daisy McFadden, 67, had to have the remains shipped and tracked from Walter B Cooke Funeral Home in Manhattan as she was in hospital recovering from back surgery.

But the delivery never arrived – and when McFadden inquired about them four weeks later, the funeral home insisted a postman left it by the front door.

‘I had no idea they use standard US Postal Service,’ McFadden told Daily Mail Online.

About 15 years later the family moved to Germany before McFadden got married and moved to America via Israel.

When her father died in 1986, McFadden – who has two sons and a daughter – invited her mother to come and live in their apartment in a brownstone in Brooklyn.

‘Those were the best years of my life,’ McFadden, who remarried in America, reminisced.

‘She was my best friend, we were together every second of every day. We were like two peas in a pod.’

Towards the end of Mueller’s life, she suffered from dementia.

‘I organized and paid for her cremation years ago because I thought I would be too upset to handle it when the time came. I didn’t want to have to deal with the heartbreak and the hassle.

‘But now this has happened and I don’t know what to do.’

McFadden has hired a lawyer, James Greenberg, to file a lawsuit against Walter B Cooke Funeral Home to pressurize the firm into producing answers.

Though she originally wanted to take action against the postal service, a clause in the US Constitution means the service is not liable for lost untracked post.

The likely outcome, if McFadden’s case is successful, is a settlement.

‘I don’t care about money,’ she fumed. ‘I just want my mother’s remains. It is so upsetting.’

Walter B Cooke Funeral Home has yet to respond to Daily Mail Online’s request for a comment. Read more: THE DAILY MAIL