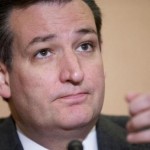 Republican presidential candidate Ted Cruz has surged ahead to become the latest front-runner in the campaign for the Iowa caucuses, dislodging Ben Carson and opening an impressive lead over a stalled Donald Trump, a Bloomberg Politics/Des Moines Register Iowa Poll shows.

The firebrand junior senator from Texas is backed by 31 percent of those likely to attend the Republican caucuses that start the presidential nomination season on Feb. 1. Trump is a distant second at 21 percent, up slightly from 19 percent in October, but below his peak of 23 percent in August.

Cruz’s 21-percentage-point jump since October is the largest surge between Iowa Polls recorded in at least the last five presidential caucus campaigns. When first and second choices are combined, he has the support of 51 percent of likely caucus-goers. The senator’s great leap forward comes largely at the expense of Carson, as Iowa’s evangelicals appear to have picked the candidate they want to get behind. The retired neurosurgeon, now barely in third-place, is supported by 13 percent, down from the first-place showing he posted in October, when he was at 28 percent.

For Iowa’s conservative voters, “the coalescing has begun,” said J. Ann Selzer, founder of Selzer & Co., the West Des Moines-based firm that conducted the poll.
The same can’t be said for the voters who describe themselves as part of the Republican establishment, which the poll recorded as 29 percent of the likely electorate. For now, Trump has 23 percent from those who consider themselves Republican establishment voters, followed by Cruz at 22 percent. Senator Marco Rubio and his one time mentor, former Florida Governor Jeb Bush, are both at 12 percent.

There’s no good news in the poll for Bush, who despite his political pedigree as the son and brother of past presidents and a massive campaign war chest, has moved up only slightly since October, to 6 percent from 5 percent, and is in fifth place. The super political action committee supporting Bush has been by far the largest political ad buyer in Iowa, Kantar/CMAG data shows.

Cruz’s new front-runner status in Iowa has been accompanied by a jump in his favorability rating, now an all-time high of 73 percent, the highest in the Republican field. That could come as a surprise to members of Washington’s establishment, who have shown disdain for him and complained that his three years there have been marked by showmanship, inflexibility and a lack of collegiality. In his campaign autobiography, A Time for Truth, Cruz’s opening anecdote recounts him becoming the target of “red-faced name calling” by his Republican Senate colleagues when he wouldn’t go along with a party vote on extending the debt limit.

Cruz dominates yet another gauge the poll takes of candidates’ strength, the “Selzer Score,” which uses multiple measures to try to assess potential upside in a crowded field. The index looks at first and second choices, as well as whether respondents could ever — or would never — support candidates not in their first two choices. (The first choices are given double weight, while “ever support” is given a half weighting.) Using that system, Cruz scores an unprecedented 97.5. He’s followed by Trump at 72.5, Carson at 67.5 and Rubio at 62.

The Texan’s rise suggests that Rubio’s recent attacks on Cruz for alleged weakness on national security have failed so far to do damage, at least in Iowa. Rubio, the subject of criticism by some Iowa Republians for not spending more time in the state, is treading water: The junior senator from Florida is in fourth place with the support of 10 percent of voters, up just one point from October.

The poll also sets up an intriguing dilemma for Trump, including in the Republican debate Tuesday: The billionaire has sometimes mocked challengers on the basis of their personalities, but doing so against Cruz could prove risky, given the high senator’s high favorable rating in Iowa. This weekend, Trump started to attack Cruz for his opposition to the Renewable Fuel Standard that supports the corn-based ethanol industry in Iowa.

In a week when he received the endorsement of one of Iowa’s most visible evangelical leaders, the poll shows Cruz with support from 45 percent of those who mainly define themselves as evangelical conservatives, more than double what Carson gets. Half of likely Republican caucus-goers in the poll described themselves as “born again” or evangelical Christian, up from 42 percent in the October poll, possibly signaling greater participation from this group. Read more at BLOOMBERG.