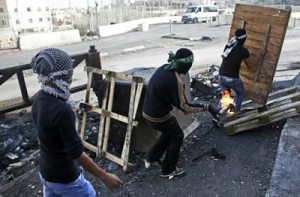 Amnesty International issued a report on the situation in Israel. 6 paragraphs mentioned attacks on Israelis – and 21 paragraphs attacked Israel for defending its citizens from those attacks.

This section of the report was particularly absurd:

While Palestinian demonstrators have thrown rocks and firebombs towards Israeli forces in many demonstrations, and there are reports that Palestinians have shot at Israeli forces in isolated cases, Israeli military and police forces are heavily protected and must ensure that all use of force is strictly necessary and proportionate, and that firearms must only be used to protect against the imminent threat of death or serious injury.

The rest of the report shows that Amnesty does not consider a single case of Israeli use of force to be justified. Because the Israeli forces have magic “protection” that stop firebombs and knives and stones and sometimes bullets from being dangerous.

The Israeli military said that there had been a violent demonstration in which rocks and firebombs were thrown at Israeli forces, and that troops had used riot dispersal means before opening fire at three Palestinians who were throwing firebombs, but did not release information to suggest that the lives of Israeli troops had been in danger.

Yes, Amnesty really said that even though the IDF explained in detail that the terrorists had not responded to the exact kind of non-lethal weapons that Amnesty insists the IDF use, and they were still throwing firebombs at them, that is not enough information for Amnesty to decide that the IDF acted properly.

One wonders what else the IDF could do to prove it acted properly, and one immediately knows the answer – nothing. Amnesty is looking for evidence of guilt, not fact-finding.

Besides this, the report shows the usual extreme anti-Israel bias. It makes numerous specific demands from Israeli authorities. Just a few of the many examples:

Israeli actions to apprehend and bring to justice those responsible for such attacks must comply with international law; there is no justification for arbitrary arrests, or for torture or other ill-treatment during arrest or detention.

Amnesty International calls on the Israeli authorities to publicly disclose the current openfire regulations for Israeli police and military forces, including those being applied in East Jerusalem. The Israeli authorities must urgently issue directives clarifying that Israeli army and police personnel can only use live fire, including .22 ammunition, when strictly unavoidable to protect against the imminent threat of death or serious injury, and that all use of force must be absolutely necessary, strictly proportionate to a legitimate aim, and in full compliance with international human rights standards.

As the occupying power, Israel is also bound by the Fourth Geneva Convention, and is prohibited from imposing measures in the name of security – including restrictions on the movement of Palestinians in the OPT – that are arbitrary, discriminatory or amount to collective punishment.

Israeli forces must protect Palestinian civilians and their property from settler attacks, and end the impunity for such attacks by addressing the systematic failures in investigating them.

But the report does not ask Fatah or Hamas to do a single thing to stop terror or incitement.  There are no demands. The word “must,” used liberally when insisting on what Israel must do, is completely absent in regard to the PA.

Even though Amnesty reported that a Fatah-linked group took responsibility for the murder of the Henkins, it doesn’t ask Fatah’s leader Mahmoud Abbas to lift a finger to stop terror.

It gives specific numbers of alleged attacks by Israel reported by biased sources, but it doesn’t mention that far more attacks on Israelis have been recorded – 440 as of Friday. No indication is given that Amnesty even tried to find such a statistic.

The real purpose of the report is to slam Israel yet again. Listing a few attacks on Jews is a fig-leaf to put on top of another hit-job.

Not putting any responsibility on the PA and Hamas shows that Amnesty really has no problem with how they encourage terrorism against Jews.