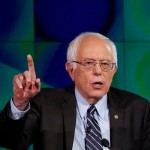 The campaign sent out an email with his top moment—saying that people are sick of hearing about Hillary’s email scandal—before the debate had even ended.

He had raised about $26 million the previous quarter. Read more at The Washington Post.