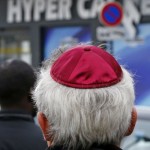 American Jews appear to be growing steadily more religious, faster than most other communities in the United States, according to a new Pew poll published this week.

The survey, conducted in 2014, studied American perspectives on religions across the country’s various sects and communities and compared them to a similar study in 2007. It found that overall, the proportion of Americans who say they are “absolutely certain” God exists has dropped sharply from 71 percent to less than two-thirds.

Pew released the findings, based in part on a 2014 telephone survey of more than 35,000 people, as religious leaders are grappling with the shifting makeup of American religious life.

The number of American Jews polled who responded saying that religion is very important in their life rose from 31% in 2007 to 36% in 2014. Those who responded “not at all” rose by one percentage point to 29%.

The percentage of Americans who say they pray every day, attend regular services and consider religion very important have also clocked small, but significant declines, the research center said.

However, among American Jews, the number saw a slight upturn.

Among American Jews, 29% said they pray daily, up three points since the first survey, and 24% weekly or monthly.